It’s been a little over two weeks since my second shot of the Pfizer COVID-19 vaccine. Here in the US we are starting to see a gradual return to normalcy, though at least in Massachusetts masking in public spaces and reduced capacity will continue to be a part of life for a little while longer. On a personal note, I’m in an extended transition period: I’m moving soon, and for the first time in a number of years will be living on my own. My housemates are in the process of moving out, the house is a mess (but also feeling more like my space), and the cats are increasingly perturbed by the changes. I am looking forward to having my own space, but not super thrilled have to do everything on my own again. And I’m not exactly happy about the not-quite-extortionate amount of rent I’ll paying starting next month.

Like many transitions, this one has gotten me thinking about life again, something I last did at the start of the year. In particular, I have been thinking about practice as a way of life. As someone whose life has often been about chasing goals, or reaching certain milestones as quickly as possible, the forced slowdown of the last year was a shock to the system. As doing things becomes possible again, I am trying to cultivate a life that is about more than moving from one thing to the next as quickly as possible.

Here’s a realization I didn’t have until after I turned 30: that life (for most of us) is actually quite long. And that, somewhat paradoxically, making the most of that life requires a certain amount of slowing down. It’s not going slow for its own sake, but rather, slowing down is a prerequisite for the intentionality required for a good life. As Ann Patchett tells us in this narrative, that intentionality is improved by practice and imagination.

Private Practice: Toward a Philosophy of Just Sitting

On the other hand, often the point of practice is just that: to practice. This again, is somewhat paradoxical, and I began to appreciate it only after a couple years of a regular meditation practice. It was also something that completely eluded me in the several years that I spent playing the violin as a teenager. I suppose practice is requirement of that elusive state: mindfulness, the feeling that you’re actually here, living your life and not just passing through it. And learning to just sit, for maybe 10-15 minutes a day, is a good way to get started.

What’s the Point If We Can’t Have Fun?

Closely related to practice, I think, is play. In fact, as this article suggests, play or fun might just be one of the foundational organizing principles of the universe. Given how much our brains seem to require meaningful work and play in balanced proportions, this idea strikes me as a having a certain amount of credibility. Besides, living with cats for two years has firmly convinced me that the importance of play reaches deep into the animal kingdom.

The Man Who Found the Flow

Finally, it seems likely that practice and play (and meaningful deep work) both help us tap into the psychological state of flow. I first encountered Csikszentmihalyi’s ideas in college, I have been thinking more about them recently, especially in context of a year when doomscrolling become a de facto part of our daily routines. It’s perhaps unsurprising that later in life I become interested in meditation, which I think helps bring about a similar state of mind.

The Bodhisattva of Compassion

Yesterday I learned about Avalokiteshvara, the Bodhisattva of Compassion. This particular bit about, Chenrezig, one of the forms of the bodhisattva stood out to me:

The bodhisattva vowed to clean up samsara once and for all. He put in a heroic effort. He thought he’d done it. But when he turned around again, the mess was back, unapologetically.

Chenrezig was so devastated by his failure to fix things that he shattered into a thousand pieces… What to do when even a bodhisattva of compassion can’t bear it any longer?

The story takes an instructive term. Amitabha, the Buddha of Boundless Light, comes down from his Pure Land and converts Chenrezig’s thousand shattered pieces into a thousand arms (plus eleven heads, so he can look in all directions). I find it hugely instructive that Amitabha gives Chenrezig a thousand tools and says, Hey, keep going.

Chenrezig’s thousand arms are a token expression of the patience and fortitude essential to the bodhisattva vow. As our world prepares to blow itself apart yet again, Chenrezig becomes more than just a symbol; the bodhisattva is an absolute necessity, a guide and refuge. 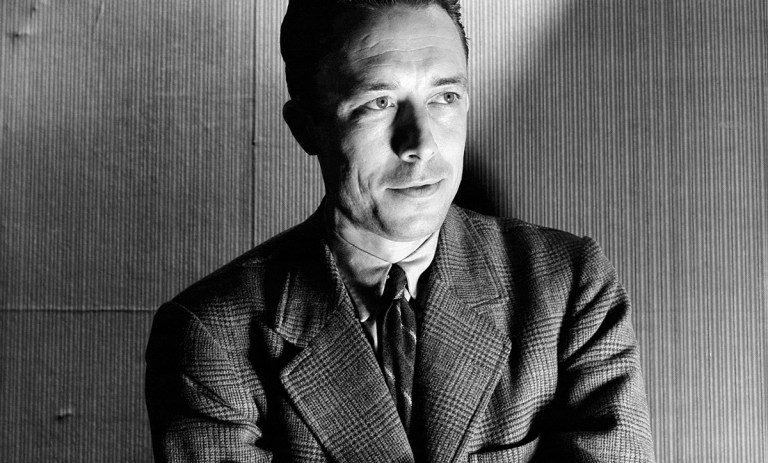 Neither Victims Nor Executioners: Albert Camus on the Antidote to Violence

Another excellent Brain Pickings piece, this time on Albert Camus who offers a pragmatic balance between idealism and reality. Popova summarizes this piece (as she does so well) with the excerpt: If he who bases his hopes on human nature is a fool, he who gives up in the face of circumstance is a coward.”

So Two Stoics Walk Into a Bar

I’ve previously noted my interest in Stoicism and Buddhism which share various philosophical similarities. This is a modern take on classic Stoic dialogue where we see two speakers (ostensible Epictetus and Seneca) discuss the intricacies of wanting, desire and acceptance. Without giving much away, I can say that it ends on the interesting note: The more understanding and acceptance you have of the reality of living, the less you are impacted when circumstances knock you down.

An intriguing, slightly unbelievable and at times heart-breaking look at the Japanese industry of “renting” family members for both major occasions and day-to-day life. Told from multiple perspectives, peppered with historical details and finalized by the author’s own unique observations and reactions, this is may be the best piece of non-political non-fiction I’ve read so far this year.

I’ve started using a physical field notebook more often in the last few months. As a computer scientist, I don’t exactly go out into the field, but I have found the process of getting away from the computer and writing things out on paper (especially if I can do it outdoors in the sun), to be a good way to get my mind into a state of deep work. This a good piece on the practice on science in different areas, and different times.

Why Field Notes Have Remained Curiously Addictive for a Decade

In the last few years, I’ve become a big fan of pen (and pencil) and paper for taking notes, journaling and sketching out ideas. More recently, I started carrying around a Field Notes pocket notebook all the time and using it to write down and keep track of all kinds of things about my day-to-day life. This is a wide-ranging and very interesting article about how Field Notes got started and kept going, along with a healthy dose of context to understand the why paper notebooks seem to making a comeback.

From inboxing to thought showers: how business bullshit took over

I’m very grateful to work in a field and environment where I have to deal with very little “business bullshit” on a regular basis. But this is an interesting look at how differences in language can shape the way we think and act and can spread unchecked through society at large. Pair this with an older article on the phenomenon of bullshit jobs.

I am a big fan of Maria Popova’s Brain Pickings blog and this is, in my opinion, the best article she’s written so far this year. It contain’s excerpts from an out-of-print by Lilian Lieber of the above name interspersed with Popova’s commentary. The book starts off using the discovery of non-Euclidean geometry to explain how science progresses, and then extends that line of reasoning to understanding the human condition, ending with a set of postulates that I think deserves to sit right beside Utilitarianism and Kant’s Categorical Imperative as foundational moral principles. A long, interesting and inspiring read. I hope to get my hands on a copy of the book itself someday.

I started this year wanting to read one book a week, but it looks like I might end up at one book a month instead. Oh well, I think I picked a good one to start with. Without going into details, this book blends together magic, time travel, politics, and a wide range of curious characters into a gripping and hard-to-put-down read. This book has made me stay up past my bedtime reading for the first time in a long while.

The original Pacific Rim is one of my favorite movies. As far as movies go, I would it’s very good, but not excellent, but it is a whole lot of fun with a lot of great and unconventional characters. I’m really looking forward to the second installment, and to seeing more of Guillermo del Toro’s excellent work.