I make no secret of the fact I’m kinda picky about keyboards, since I spend a large part of my day typing away. I also think that there should be mandatory college level typing classes, but that’s just me. My personal favorite right now is a simple Dell multimedia keyboard because I like the feel of the keys and partly because I got it free.

Though I need to have a keyboard that I can type comfortably on, I’m not really one for the more interesting keyboard designs out there. I use a simple Dell multimedia keyboard or my laptop’s keyboard. The ones featured below are keyboard designs which are readily available and which I’m sure some people swear by, but ones that I can’t see myself using in the near future.

This might just be the most sane design of the ones I’m going to look out. It claims to be the best keyboard on the planet, but what grabs your attention right off the bat is the fact that the keys are completely blank. Needless to say, this keyboard isn’t for anyone but the most experienced typist. I’m a fairly competent typist, but I’m not that good yet. At $130 a pop, you’d better be doing a whole lot of typing.

From a technical standpoint the Ultimate’s claim to fame is that it doesn’t use a membrane key system like most modern keyboards but rather has gold-plated mechanical keyswitches like the legendary Model M. I don’t think I’ve ever actually used a mechanical  keyboard so I can’t really comment about it, but if you browse the web, you’ll soon find many testaments to its superiority.

This is actually a keyboard that I considered buying at one point. It’s a feature packed wireless keyboard with a very sleek design. It sports a trackpad so that you can go without a mouse if you really wanted to and also makes for easy scrolling. Unlike many wireless keyboards, it’s reachargeable so you don’t have to worry about replacing batteries. It’s more expensive than the Das Ultimate at about $180 ($135 at Amazon) and I have no idea about the typing experience. I looked into getting one earlier this year, but the high price and it’s large size (which makes it unweildy at a small dorm room desk) meant that it wasn’t really a justifiable purchase.

If I remember correctly, this keyboard got a few seconds of screen time in Die Hard 4. At under $25 dollars it’s certainly the cheapest the keyboard on the list, but I seriously doubt I’d have a enjoyable time typing on it. Though it’s a nice idea, I can’t see myself ever actually needing to use one. If I’m on the go, I’ll either have access to a full computer (with keyboard and mouse) or be carrying a portable computer. I suppose if you had an iPhone like device with a USB port you might be able to hook this up to it and get a better typing experience on the go, but that seems just a little too nerdy even for me. 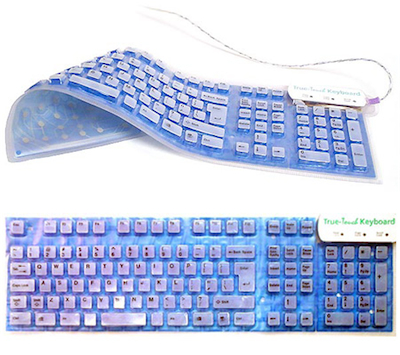 Most keyboards are QWERTY layouts, but it’s not too hard to change your keyboard layout in software to something like DVORAK if you want to. It’s a bit harder to get your hands on a keyboard that has a non-standard layout that you want. The Optimus Maximus keyboard solves this problem by having each key be a fully programmable tiny OLED screen. So you can assign basically any character to any key and change your layout to better suit your needs. You can also change to more esoteric layouts like Arabic, Greek or Hiragana. There’s a small panel of extra multimedia keys that can be similarly customized to be custom app launchers. I think it’s a good concept, but at an approx $1600 (from their website) I’d rather get a new MacBook with that money.

All the keyboards I’ve listed above have been kinda quirky, but still look like normal keyboards. The Maltron however is a special ergonomic keyboard that has a special split-bowl design. I’ve personally never suffered from any sort of RSI (I make it a point to take regular breaks) but I know that there are people who swear by the effectiveness of bowl designs. It’ll certainly take some getting used to, but it might just be worth if it means saving your wrists.

The strangest keyboard out there isn’t really a keyboard at all. It’s a laser projector the size of a cigarette lighter that projects the image of a keyboard onto any flat surface in front of it. It certainly packs some serious geek cred, but I’m skeptical of its utility as a general purpose typing device. I really think keyboards need to have some semblance of tactile feedback even if it’s minimized like with the newer Apple keyboards. It’ll be interesting to see if something like this takes off and how it’s put to use. 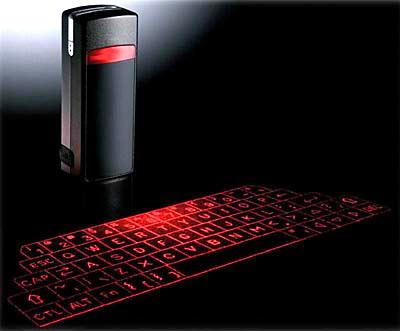 All of the above are fully functioning, working keyboards. They may not be what you’re used to, but they’re not toys either. With the possible exception of the Optimus Maximus, none of them are really too highly priced. There are a number of other designs that I didn’t cover, especially the various split and ergonomic designs. If you have real experience using any of these or have a personal favorite design that I haven’t listed, do let me know in the comments.