My brand new Eee PC 1005HA arrived yesterday. The first thing I can say about it is that it’s a beautiful little machine. It’s surprisingly light, even with the 6-cell battery and the shiny blue exterior is just beautiful. I was a bit apprehensive about the color choice, but it’s turned out really well. Below are pictures of the Eee PC closed and open. 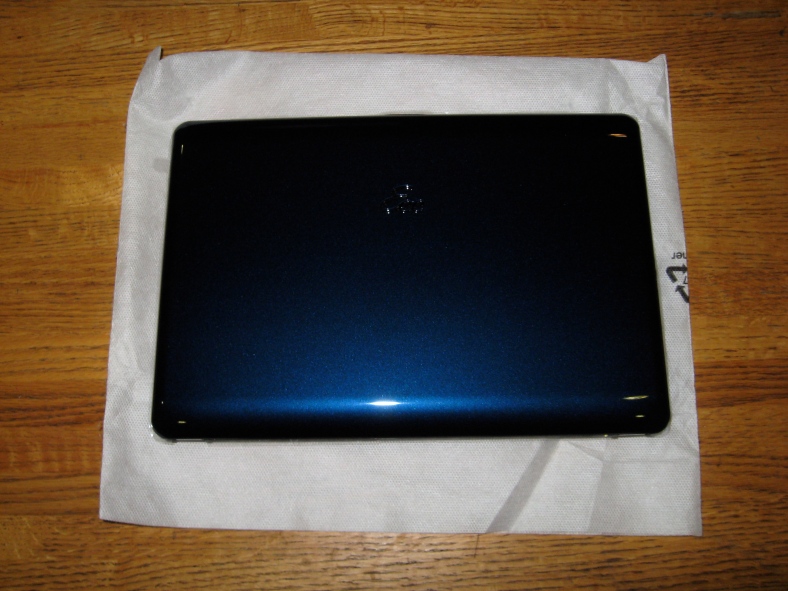 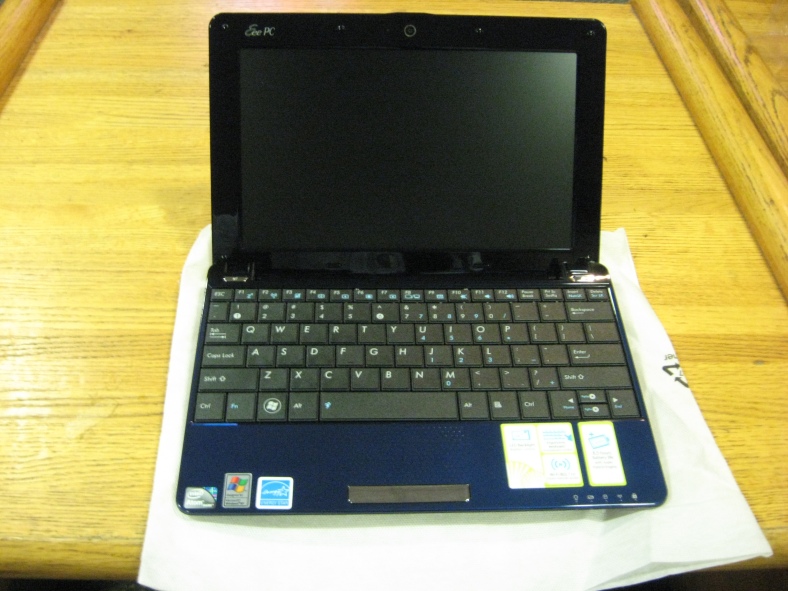 The Eee PC comes with a battery and the power connector. It takes only a few minutes to get everything connected and the battery charges up pretty quickly too. Despite being a tiny machine, it works really well. Even though it’s considerably smaller, the keyboard on the Eee is large enough to be very comfortable and requiring very little adjustment. The keys are supposed to be 92% of normal size which I think is about right. The only little problem I have is that the up and down arrow keys are really tiny, but I think that’s something I’ll get used to easily enough. The keyboard is much easier to use than the one on my friend’s Lenovo netbook.

The screen is a nice 10″. I’ve found the 8″ and 9″ screens to be a bit too small for regular use. I think 10″ is the sweet spot. It’s still far too small for anything like programming or graphics where you need to see a lot of stuff at once, but for email, calendars and some writing, it’s a decent size. With a full screen Firefox and web apps its possible to get a lot done. Gmail and Google Calendar work quite well and a number of Firefox extensions like Twitterfox make it a breeze to stay connected easily. I had thought I could use it for blogging, but the WordPress web interface devotes a bit too much space to the sidebar to be very usable on such a small screen. I might resort to something like Bespin or Google Docs for the actual writing and wait to get to a larger monitor before I clean up and publish.

With a 6-cell battery and Asus’ Super Hybrid Engine technology the Eee PC can be expected to go a long way on a single charge. I think the claims of 8.5 hours are a bit unrealistic, but 7 hours for what I’ll be using certainly seem possible. At that rate it would be no problem for me to take it out in the morning, use it for a whole day of classes and meetings and then charge it when I come back to my room at night. Of course, I won’t actually be using in class all the time, but there will be ample opportunity for taking down notes and deadlines to put it to good use.

Finally at about $329, it’s not the cheapest netbook on the market, but it’s not the priciest one either. It’s pretty much in the middle and for the battery and other specs, I think it’s a pretty good deal on the whole. I’m wish they would have included at least a basic sleeve for that price, but since I can get a good one for about $17, thats not something I’m too bummed about. I’m looking forward to using this little baby on the go. I have a week full of training activities next week where I hope to give it something of a stress test and will be sure to report back on how that goes.